Our race-inflected culture not only exists, it thrives. The question is whether it thrives as a virus or a bountiful harvest of possibilities. ~ Toni Morrison 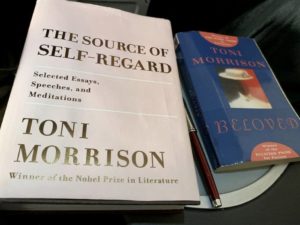 You likely know how it is, the bustle of getting to the airport and through security, then finally getting settled in your seat. I had just finished a week at Spirit Rock Meditation Center in California celebrating The Gathering of over 70 Buddhist teachers of African descent for five days followed by two days of training with over 350 black folks. Tired and beaming, I’m headed home to Charlotte, NC.

As I board the flight and began settling into my aisle seat, I pull out my read by the late Toni Morrison, The Source of Self-Regard. The white man sitting next to me is also settling in, and pulls out his read, Toni Morrison’s Beloved. We glance each other a smile and continue to settle in. Before takeoff, he orders a gin and orange juice and I order water without ice. We introduce ourselves. Let’s call him John.

John shared that he is returning from spending a week in Napa golfing with 8 college guys he’s known for over 25 years. This was their 10th year meeting annually, and he expressed pride in having such good friends at the age of 53. I look at him and realize he is the age of my son although he seems older. Maybe it is me that feels older. I laugh silently.

John seemed energetic and shared that he was eager to get home to his wife and daughters. I wasn’t sure he would want to hear about where I had been, or maybe it was that I didn’t want to share it with a stranger. Instead, I shared that I had read just about everything Toni Morrison had written and that this current book, apparently the last one published before her recent death, was the most profound in terms of character and craft. I asked John what motivated him to read Beloved. He said that he had purchased the book years ago but had never read it, and as he was leaving home for this trip, the book “fall off his shelf.” For some reason, a line in Beloved flooded my memory: “…You just can’t mishandle creatures and expect success.” Next, I thought: What a ride this read will be for him. He ordered another gin and orange juice before take-off.

After take-off, we settled into our respective books. I had one chapter remaining in The Source of Self-Regard. As with Morrison’s other publications, it’s not a fast read, more a savoring. I often will read and re-read a paragraph then ponder it for a while before reading on. I’m mostly in awe at how Morrison is persistent in her message to talk “to” Black people, not talk “for” them, and how her focus is not on slavery per se, but rather on black culture, interior pain, and character. This last chapter had me feeling satiated, sitting up straighter, clear, centered, and fortified by her words. This was on top of feeling deeply satisfied from the field of wise care I had bathed in with other Black Buddhist teachers and practitioners. I wanted for nothing!

I glanced over at John, who was also into Beloved. He seemed tight and edgy. I recall feeling that way when I read Beloved years ago. He, too, reads then puts the book down, then returns to reading. He seemed to be about one-third of the way into the book. He ordered another gin and orange juice. I wonder if he was reading Chapter 16 (yes, I remember it vividly), where Sethe instinctually decides to kill her children instead of allowing them to be taken and sold into slavery. That moment when, once read, we can’t help but ask: Is this criminal? What is the greater crime? Or maybe he was squirming in his seat because he was reading about Sethe being held down and beaten while the white boys stole milk from her breast, leaving nothing for her children.

Dinner is served. We rested the books. Surprisingly, John, now quite red-faced, pulls out a photo of his wife and children. I join him in this prideful moment. I wonder if reading Beloved makes privilege palpable, making one cherish their loved ones even more. This was all that was spoken over our meal. I wondered if it felt dangerous or too risky for him to ask me about my life. Or worst, as least for me, that it never occurred to him.

I finished the last few pages of The Source of Self Regard and closed the book, bringing it close to my heart. As an author, I’m deeply inspired by Morrison’s example. I marvel at her clarity and brilliance; how close she stays to her inside voice, and how brave she is to trust and share it unapologetically. I am grateful that she lived and that she taught us, and I can taste this goodness. I ordered a glass of red to toast the moment.

I glanced over at John who was napping with Beloved at his chest and surrender on his face. Was he napping because this is what one must do from time to time when reading the dense forest of Morrison’s work, or was he napping because his gin and orange juice had finally caught up with him? It didn’t matter, really. Morrison’s work is meant to be meditative. My guess is that we were both somehow in the “scorched earth” of Morrison’s wise love. Therein lay the bountiful harvest of possibilities. ~ Ruth King