Excerpt from Mindful of Race: Transforming Racism from the Inside Out, by Ruth King

You must teach your children about racism, not from a distance, but from your own wise heart. Imagine telling your children (regardless of age) some version of the following story with such regularity that they remember and tell their children. And don’t just tell them this story, notice how such truth telling impacts you and your actions, then talk about that too: 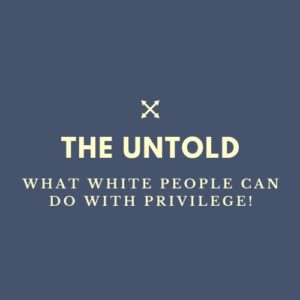 My child, I’d like to tell you, from my lips, the truth about our racial history — about whiteness and about being a member of the white tribe. Years ago, our ancestors did a horrific deed against the human race. They owned black people as slaves and treated them with utter disrespect. Beatings, rape, torture, lynching, ongoing terror; we sold their children to the highest bidders and owned them as chattel. And we relied on them to grow our food and take care of our children — your ancestors. Yes, our people did this — white people. Not only did we do this to blacks; we also did hateful things to people who we felt were substandard, like Indigenous Indians, Mexicans, Jews, Japanese, Chinese, and poorer people than we were.

It’s true that the greatness of this country, to a large extent, is due to the slave labor of blacks, and we owe them a huge debt. We have, as a white race, disenfranchised them and systematically organized to keep them from participating in and benefiting from the wealthiest country in the world. Our success, however big or small, and the many privileges we enjoy as a family are rooted in this stained and denied history. Even to this day, our people benefit from the institutional practices that intentionally and systematically oppress black and other dark bodies. Many poor white people feel that they are better than black people — even better than the first black president of the United States.

Being ashamed about this is not as helpful as understanding that we have a lot of work to do to begin to respect blacks and dark lives, to release and share the wealth and privileges we have for all they have given to us as white people.

Blacks and other POC are rightfully angry toward us because of the centuries of hatred and disrespect we have shown them. We have continued as a collective to build prisons to hide and erase them, instead of facing the years of hatred toward them and shame toward ourselves that have resulted in destroyed hearts, minds, and communities. Most important, we have died inside as a result of making hatred normal as a white race. We have become numb, dismembered, crude, and unloving toward our own race, because we cannot access the depth of love as a collective with such a stained and unfinished and unhealed history of disrespect and hatred toward others, especially black people.

What this means to you and me is that we must wake up to this history and own that we walk with great ease in this country on their still sore backs — backs we whipped into submission. What we witness today in the black collective expression is the result of generations of blacks who have witnessed their parents and grandparents killed, lynched, raped by our men, and hated and disrespected by us. They were helpless against it — we made sure of that.

You need to understand, my child, that while we have other fears, we tend to walk without racial fear, and they don’t. This world is not safe for them and other people like them — dark people — and it is because of our history, our whiteness; our supremacy. To this day we have better schools and access, and we still are the central race in all aspects of respectable society, work, and leadership. Black communities are largely poor, and their schools are disenfranchised because we have kept them at a disadvantage. Many blacks are considered criminals, even though they are not doing anything more than we do in our communities. Yet they are imprisoned and used again as slave labor.

Many whites want to maintain white supremacy, and there continues to be white nationalist rallies and terror attacks on other races near and far, currently emboldened by senior members of the White House.

We have done horrible things as a white race, unspeakable things, yet we have not spoken or been honest with each other or ourselves as a white race. While you and I may not have done these things personally, this is our history and our inheritance.

Our challenge is to do everything humanly possible to recognize and interrupt any act of disrespect and unearned privilege and to use our voices, our bodies, and our hearts to make this wrong right. We need this in order to be free. This does not mean kissing up to blacks or anyone else, although it may seem that way. Rather it means a willingness to face into the pain they carry because we’ve been so cavalier, numb, and blind to the role we have played in the past and present horrors of their lives.

Our job now and for a long time is to own up to it, apologize, and recognize that their expressed pain is not directed to you or me as an individual but to us as a white race and as the institutional power that continues to oppress them, often through our ignorance, greed, comfort, righteousness, and indifference.

I tell you this because you may well receive much disdain from black people. When they see you, they are also seeing our unclaimed and terrorizing history; they see you as someone who, like our forefathers, hated them, and they see our ignorance, the way we casually delight in a disowned and forgotten history — a history where we considered them as less than human, as possessions, as chattel. This history wasn’t that long ago. They are and should be hurt and angry by our utter neglect and generational hatred.

There is much to be done. There is no time for guilt and shame. We must forgive ourselves and correct this wrong. We must become advocates for all of humanity, especially black and dark-skinned bodies. Enough said for now, but we will speak of this again and again and again.

As a white person, what comes up for you as you consider telling your child — or any white person — such a story? If you are feeling uneasy or queasy or have an aversion to verbalizing such a story, you might ask yourself why. What beliefs or emotions get in the way? If “The Untold” feels too far-fetched, what message or stories feel closer to you? Consider personalizing a story that reflects the truth of your individual experience as a racial being acknowledging your membership in whiteness.

When you, as a white person, collude in silence, sameness, and blindness of the truth of racial harm and injustice, you maintain privilege by avoiding the intense heat and creative chaos that is required to compost racial avoidance into racial awareness, honesty, and accountability. Not being willing to speak openly about racial truths, in your own words, is one way white supremacy is upheld and privilege is maintained. With such collusion, Black, Indigenous, and People of Color must carry the wait of pointing out the obvious and the unspoken to you, while also being the target of blame. This cumulative and repetitive motion injury is a reflection of an imbalance in racial responsibility, and contributes to chronic fatigue, rage, and reactivity in BIPOC.

White people, you can begin to break this cycle by talking to loved ones about whiteness, white supremacy, and your racial history. Come out of hiding. Share the weight of injustice. Dare to live full bodied and intimately membered in humanity.

27 thoughts on “The Untold”